Why Ken Fisher is WRONG about Annuities – Federal Regulations 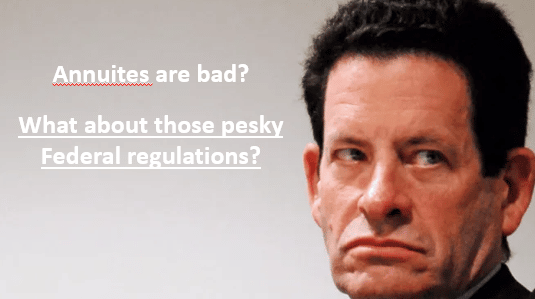 Why Ken Fisher is Wrong on Annuities: Federal Regulations.

Most regular viewers of financial news on cable TV will recognize the name Ken Fisher of Fisher Investments and his lack of love for annuities. In fact he hates them and is telling everyone who will listen to him as much. His commercial even goes as far to state that he would ‘die and go to hell before he will sell an annuity’.

Simply put, he states that Annuities are expensive and only benefit the salesman.

Mr. Fisher believes, which he has published, that investing in high dividend paying stocks will generate an income throughout retirement. This will be accomplished at a lower cost than an annuity, and without giving up control of one’s assets for a period of time.

Now, we at IRMAA Solutions are not arguing against dividend stocks or stocks in general. The reality is stocks do provide upside potential, possible protection from inflation, and even income from dividends. Nor are we saying that annuities are totally free, but what we are saying is that due to what is known Ken Fisher is flat out wrong about Annuities and yes, you need one too.

1. Retirees are relying more and more on Social Security for income while retired.

According to Social Security’s “Fact Sheet” from December of 2019: “50% of married couples and 70% of unmarried persons receive 50% or more of their income from Social Security.”

This is the exact reason as to why Irena Dushi, Howard M. Iams, and Brad Trenkamp of the Social Security Administration released a research report aptly titled: “Social Security benefits are the most important source of U.S. retirement income.”

2. Social Security benefits for retirees are in trouble and that is all due to federal regulations.

This little tidbit of law becomes even more of an issue to those like Mr. Fisher as the other federal law tied to the first is that the bulk of Medicare premiums are deducted directly from any Social Security benefit being received.

With, according to the Social Security Board of Trustees, the cost of living adjustment (COLA) for Social Security being projected to be no higher than 2.40% for the foreseeable future and Medicare premiums projected to inflate by just 6.00% the reality of this “most important source of U.S. retirement income” keeping up to inflation is extremely limited – in fact, for most retirees there is actually no chance of it being what is expected at all.

What we know: Social Security benefits, when applying health costs from Medicare, will never keep up with inflation throughout retirement!

Below is a graph of a 55-year-old person today, who is planning on retiring at age 67, is earning $60,000 a year in wages, and will enroll into Medicare when eligible.

According to Social Security’s Quick Calculator this 55-year-old will receive about $32,270.00 in benefits at age 67. The projected Social Security COLA is pegged at 2.40% while their Medicare premiums will inflate by the projected rate of just under 6.00%.

What we know (again): This person’s much need Social Security income will never grow.

Therefore, how does one offset this loss of this “most important source of U.S. retirement income”?

The easiest method may just be to purchase something that provides a guaranteed income for life which just so happens to be the one thing Ken Fisher hates: an Annuity.

Granted, they key demographic that Mr. Fisher is most likely targeting is the affluent whom he may believe has no need for Social Security, but there are also the other 2 federal regulations that fly in the face of his stance:

2. The income used to calculate IRMAA just happens to include not only Social Security, Qualified Assets and Capital Gains, but also any form of Dividends as well.

Following Mr. Fisher’s advice will lead countless investors into IRMAA, which is a tax. The consequences are much higher health coverage costs throughout retirement and quite possibly complete loss of all Social Security benefits too.

Due to federal regulations Ken Fisher is wrong about Annuities – YES, you need one!