Roth Conversion before retiring – it is a must!

You have been investing in that Traditional 401(k) for years. The strategy is what every financial professional tells you to do as you are lowering your tax obligation today and possibly paying even less in taxes tomorrow. The problem, though, the federal government has changed the rules and this strategy just might cost you your Social Security benefit.

The time to be planning for that Roth Conversion is now!

How can this be?

It is simple really, and quite an ingenious move by the federal government too.

When you retire, become 65 years of age or older and are no longer covered by creditable health coverage through an employer or spouse’s employer you must enroll into Medicare.

Yes, it doesn’t sound like a bad idea as Medicare, for those who are properly insured and who use the program prudently, is a fantastic program, but please note that Medicare is not free.

In fact, it could be kind of expensive as full coverage through Original Medicare can cost on average just over $10,000 for a couple in 2022.

Still not bad considering how much health insurance is on the open market, but also note that Medicare is based on your income through the Income Related Monthly Adjustment Amount or IRMAA.

Medicare will look at your income while in retirement and if you have too much of it you will be pay more for your Medicare coverage.

Here is where the ingenious move comes in: The income IRMAA uses to increase your Medicare premiums is your adjusted gross income plus any tax-exempt interest you may have or your Modified Adjusted Gross Income (MAGI).

This is where your retirement savings come into play – that Traditional 401(k) when you must make a required minimum distribution (RMD) at age 72 will not only count as taxable income it will be added to your other income as well to determine IRMAA.

That other income, you may be asking, just happens to be almost everything else you have that generates an income like Capital Gains, Dividends, Social Security benefits and Wages.

Why this move by the federal government is even more incredible: your Social Security benefit pays automatically any IRMAA surcharges you have, plus the bulk of your Medicare premiums.

See how it works?

You are encouraged to save for retirement by investing into a Traditional 401(k). You are told that you lower your tax burden today and later when you take the money out you will be in a lower tax bracket.

Where the federal government changed the rules is through Medicare and Social Security.

But how bad can it be?

Well, according to Social Security the cost-of-living adjustment (COLA) that you will receive on annual basis to keep up with inflation is projected to be no higher than 2.4% through at 2036.

During this same time Medicare is projecting that premiums, which come out of your Social Security benefit, will inflate by over 5.76%.

Please don’t forget about that surcharge from IRMAA due to that required minimum distribution from your Traditional 401(k) and eventually your Medicare premium will consume more than 100% of that Social Security benefit.

It truly is only a matter of time as projections from Medicare expect to see costs inflate by more than 2 times Social Security benefits.

Doubt it, let’s look at a couple of examples:

Social Security’s Quick Calculator projects his benefit to be $38,508.00 in 2027. This Social Security benefit will grow at a 2.4% COLA but will also have taxes reducing it too.

Remember he still has Medicare to pay for which today costs for $2,992.00 annually for Part B and D and is inflating by 5.76% pre-Covid.

Below is a chart detailing what he can expect from in terms of his take-home Social Security benefit: 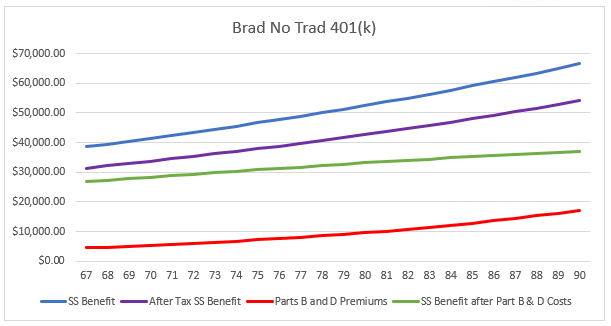 Notice the “green line” that represents his actual after tax, after Medicare expense Social Security benefit doesn’t really ever increase?

So why a Roth Conversion?

The reason, that Traditional 401(k) is not going to make his Social Security better and in reality it is going to make it so much worse.

To further our example above with Brad, let’s have him invest 15% of his salary into a Traditional 401(k) starting at age 60 through the age of 67 since this what the experts recommend. He will also receive a 6% company match that is receiving on average a 7% rate of return. Oh yeah, and he already has $300,000 in this account.

The result of this updated example is at age 72 when his RMD starts he will have close to $1 million dollars. His Social Security benefit, if the federal government is to believed, will be over $43,000 for the year.

Here is the good news for the federal government: 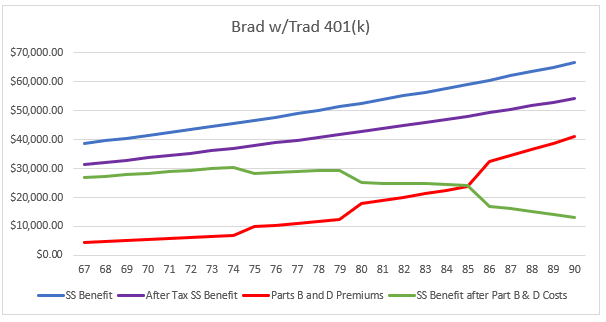 The above chart should be self-explanatory to anyone viewing. If not, please give this to anyone not in the financial industry so they can explain it to you.

We already know the response: he can always take money out of his Traditional 401(k) to offset that loss in Social Security benefits.

Newsflash: any distribution from that Traditional 401(k) will only count towards IRMAA and Brad reaching any bracket faster is a distinct possibility.

Again, why a Roth Conversion?

The simplest reason is a saving of $178,000 in Social Security benefits.

But what about the taxes on that Roth Conversion?

Yes, Brad will pay taxes on that Roth Conversion but Brad has 7 years to do to convert which can control that cost.

Worst case scenario: if Brad implements a Roth Conversion at his income tax rate he will incur about $66,000 in taxes.

So the question comes down to this:

The icing on the cake: due to the terrorist organization known as Congress anyone entering IRMAA will not receive protection from the Hold Harmless Act – this happened in 2009.

Your health is your greatest asset…the time to plan for it is today!