The 2022 Presidential Budget and the Future of Healthcare

On May 28th, 2021, President Joe Biden released his proposed 2022 budget plan for the United States. This plan contains proposals that would change Medicare and the general healthcare system in very significant ways.

The President’s proposed plan is laid out in a 72-page document. Of those 72 pages, the majority of proposals regarding Medicare and healthcare are found on one page: page 24. Although there is only one page, it is full of proposals and important information.

Below is a quick look at the various proposals, what they would do, and how they could affect the nation in a positive or negative way.

Again, there is only one page, but there is a lot in that page that may alter the United States forever. Let’s take a look at each initiative proposed in the President’s plan and what each could mean for you later down the road.

Lowering the cost of prescription drugs.

This initiative needs little explanation; the title says it all. The fact is that the price of prescription drugs has been rapidly rising over the last few years. With this initiative, the government would attempt to bring those drug prices down to affordable levels. Let’s look at the pros and cons of the proposal.

Lowering the cost of prescription drugs – What is great.

The cost of prescription drugs has been skyrocketing for years. For many people, these drugs have become unaffordable. Lowering these costs is a necessary action that must be taken.

To give you an idea of why this issue must be addressed, we will look at a drug called Glimpride.

Glimpride is a tablet that helps Diabetics control their blood sugar levels. Thankfully, this drug is extremely affordable as it is currently retailing for about $0.50 per tablet. This may not seem like a lot, but 11 years ago its price was only $0.13 a tablet.

While there is inflation with everything, the inflation rate for Glimpride has been over 13.00% year after year for the past 11 years. This kind of inflation is excessive.

The cost of prescription drugs is astronomical and there seems to be no end in sight, but thankfully the President is addressing this problem.

With President Biden’s proposal, the Medicare program (which is the nation’s largest insurer) would be given power to, “negotiate payment for certain high-cost drugs and requiring manufacturers to pay rebates when drug prices rise faster than inflation”.

It is believed that allowing Medicare this power would result in, “lower drug costs and save money for Medicare beneficiaries and people with job-based insurance.” The reforms also have the potential to yield over half a trillion in federal savings over 10 years. These savings could then be used to pay for coverage expansions and improvements.

Lowering the cost of prescription drugs – What is not great.

While the issue of rising prescription drug costs must be addressed, the proposed solution from the Biden administration is not without potential drawbacks. There are three main disadvantages of this plan.

For example, drug manufacturers can very easily be swayed into lowering the cost of say, Fiasp a fast acting drug that lowers the sugar levels in Diabetics, but they may make up that loss in revenue through increasing the costs of inexpensive drugs such as Glimpride.

A good example of this is Insulin. According to an article from DrugWatch.com, Insulin can cost as much as $450 a month in the United States. The same drug in Canada currently sells for about $21 a month. Under the Favored Nation Model, the cost of Insulin in the United States would be reduced to $21 a month. It could be even cheaper if it were discovered that the manufactures were selling it for less than $21 elsewhere.

However, President Biden paused this program within his first 100 days, and it appears it would be completely abandoned after his budget plan passed.

Having spent many years studying and working with the Medicare system, we at IRMMA Solutions will be the first to tell you that the current Medicare system has shortcomings that should be addressed. President Biden’s plan seeks to address some of the issues as well as issues with Medicaid and coverage provided by the Affordable Care Act (ACA).

Improving Medicare, Medicaid, and ACA coverage – What is great.

President Biden’s Budget is calling to:

Expanding Medicare coverage would address Medicare’s biggest drawback which is that there is no coverage for dental, hearing, or vision care. Currently, the only way to obtain coverage for these services is to enroll in a Medicare Advantage plan. The expanded coverage would remedy this issue. These services are all essential in maintaining good health. Care in these areas has been shown to reduce overall health costs.

For Medicaid, which is typically state run, there is a requirement for income that many cannot reach or maintain. Due to this income requirement many are not able to receive this health coverage. President Biden’s Budget may allow for more access or an ease in requirements to qualify for the program.

As for the deductibles in the ACA marketplace, they can be as high as $12,600 for the year. Any intervention in bringing down this cost would be substantial to those who are not in an employer health plan.

Improving Medicare, Medicaid, and ACA Coverage – What is not great.

There are two aspects of this proposal that could result in negative consequences.

This is where President Biden’s plan begins taking some very bold measures. The Plan is proposing:

Unfortunately, the proposed budget does not go into detail about what this public option would look like or how it would function. As such we can’t really look at the pros and cons of such a proposal. However, we can look at the existing system.

Currently, a public option already exists in many states, but as previously pointed out the plans available in the ACA marketplace tend to be somewhat expensive.

That is close to 30% of that household’s income in a year before taxes are even paid.

Of course, that is the current system and there is no telling what the President’s plan may look like. However, as it stands today, the Public Option coverage is far more expensive than the plans that are available through employers.

Lowering the age of Medicare eligibility.

Currently, to be eligible to enroll in the Medicare program you must be 65 years of age or older. There are some exceptions, but this is the general rule. Under the proposed budget, the required age would be reduced to 60.

Lowering the age of Medicare eligibility – What is great.

Many people in the United States are retiring before they turn 65. The issue with retiring before you turn 65 is that you are no longer covered by your employer-provided insurance, but not old enough to qualify for Medicare insurance. This means you must purchase your own private insurance plan which can be quite expensive. Reducing the eligibility age to 60 would help provide affordable insurance for some of those early retirees.

To get a better idea of the challenge faced by early retirees, lets take a look at a private insurance plan for a couple living in California.

By lowering the age of Medicare eligibility more people in the U.S. can retire earlier without the worry of extremely high health insurance premiums and deductibles.

Lowering the age of Medicare eligibility – What is not great.

The main issue with lowering the age of eligibility is that we may overload the system and run it into the ground.

According to the Medicare Board of Trustees, the Health Insurance (HI) Trust Fund of Medicare is projected to be insolvent by 2025. This projection is based on figures prior to the Covid-19 outbreak.

By adding even more people into the program without another form of revenue the HI Trust Fund may be depleted even faster.

One potential remedy for this lack of revenue is to alter Medicare’s Income Related Monthly Adjustment Amount (IRMAA).

IRMAA is a surcharge that is tacked onto a beneficiary’s Medicare Part B and D premiums. It should be noted that a beneficiary only becomes subject to IRMAA if the government decides that the beneficiary earns “too much” income. Check out this article to learn more about IRMAA.

By adjusting the IRMAA brackets, Medicare can charge “wealthy” beneficiaries more for these two types of coverage. This additional income could make up for any shortfalls within the Trust Funds.

The effect though is that for anyone subject to IRMAA, Medicare may become more expensive than the health plans that are available to them through their employer or open market.

There is one final initiative in President Biden’s budget that may alter the course of our country forever.

In his proposal, President Biden calls for healthcare to be, “a right, not a privilege.” Depending on your political standing, this may or may not sound like a fantastic idea to you.

President Biden’s Budget is calling for a reform to how Medicare pays healthcare providers. Historically this means that the reimbursements received by healthcare providers for their services will decrease. If that trend continues, there could come a time when the pay provided to healthcare professionals becomes so low that no one wants to provide it.

If healthcare is a right, it will be up to the government to somehow provide that service. That has historically been a dark path to tread.

Page 24 of the President’s proposed budget outlines most of the President’s goals for healthcare. Although it is only a page, it is full of important proposals and information. Of course, with any proposal there are benefits and disadvantages.

So, is the President’s proposal good or bad? Well, like any plan, it has its positives and negatives. There is much in the plan that could help the people of America in good ways. There are also aspects of the plan that could create a big mess. For now, we will just have to wait and see how things play out. 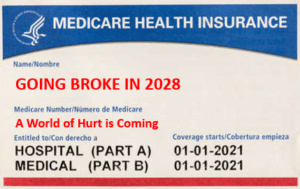