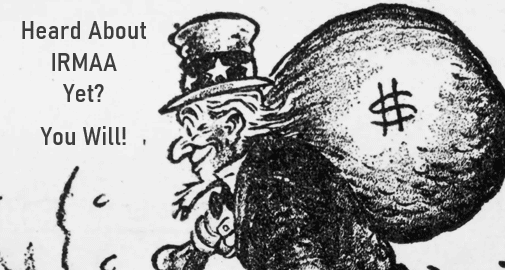 Medicare’s Income Related Monthly Adjustment Amount or IRMAA is simply a tax on income for those generating too much income while enrolled into the program.

Unfortunately for millions of Baby Boomers reaching retirement they are finding themselves on the receiving end of this tax which comes in the form of higher Medicare Part B and Part D premiums as well as a reduction in Social Security benefits.

When was IRMAA created?

In 2003 Congress passed the Medicare Modernization Act (MMA) where on page 300, the Act called for a “reduction in premium based on income” for “individual(s) whose modified adjusted gross income exceeds the threshold”.

What is Income for IRMAA?

Income, according to MMA, is defined as “Modified Adjusted Gross Income as defined by section 62 of the Internal Revenue without regard to sections 135, 911, 931, and 933 of such Code AND increased by the amount of interest received or accrued during the taxable year which is exempt from tax under such Code”.

What were the initial brackets?

IRMAA was designed to be implemented in January of 2007 and the brackets on a monthly basis were:

Where there any changes to IRMAA since 2007?

Yes, there have been a few, with the biggest adjustment happening in 2010 with the passing of the Affordable Care Act (ACA) or “Obamacare” as it included Part D too.

The IRMAA brackets in 2011, on a monthly basis were:

As it can be seen through the changes from 2007 to 2011, thankfully, the IRMAA income thresholds increased by roughly 1.60%. Unfortunately, though, the Medicare Part B premium inflated by 5.45% while the surcharges in each bracket inflated on average by over 17%.

In 2013 the Bi-Partisan Policy Center (BBPC) lobbied for the IRMAA income thresholds to be lowered by 11% for individuals and over 45% for married couples.

The intention of the BPPC was to have the IRMAA brackets be:

During this same time, through President Barrack Obama’s Budget, IRMAA surcharges were ordered, beginning in 2017, to be increased. The Budget called for restructuring IRMAA premiums “under Parts B and D by increasing the lowest income-related premium five percentage points, from 35% to 40% and also increasing other income brackets until capping the highest tier at 90%”.

Ultimately, the plan was to lower the brackets to ensnarl more people in IRMAA while also increasing the amounts of the surcharges.

This move would take pressure off Social Security’s obligation to pay benefits to wealthy people who reach IRMAA as these surcharges automatically come out of that benefit.

By 2015 Congress enacted the Bi-Partisan Budget Act that did not take into account the changes called for by the 2014 Presidential Budget. This Act ensured that the IRMAA Brackets were to remain constant through 2028 as they were not to be adjusted for inflation until at least that year.

With the passing of the 2015 Bi-Partisan Act IRMAA brackets remained relatively the same with only the highest 2 IRMAA brackets being adjusted higher by $1000.00 each.

In 2018 Congress passed yet another Bi-Partisan Budget Act (BPBA-18) that altered the IRMAA bracket to what there is today, by adding a 5th surcharge bracket. This Act also provided language to have the IRMAA brackets adjust by the “Consumer Price Index for all urban consumers (CPI-U)” starting in 2028.

Since 2018 Congress has not enacted any laws regarding IRMAA but there have been some slight changes to the brackets as the current Administration in both 2020 and 2021 have increased the thresholds.

The IRMAA brackets currently, on a monthly basis are:

In terms of the history of IRMAA Brackets each bracket since inception has risen by:

As for the future, at the time of this report, there is no data on where the IRMAA brackets may be past 2022.

The one possible known is the projected amount of surcharges in each IRMAA bracket as the Medicare Board of Trustees (MBT) provides an estimate of where premiums, deductibles and surcharges for Medicare need to be for the program to remain solvent.

With the 2015 and 2018 Bi-Partisan Budget Acts keeping the brackets level and without a change from any current Administration the projected 2028 IRMAA brackets, on a monthly basis, are:

Note: the MBT’s last 2 reports, due to conflicts and Covid-19 are not provided, the above chart is as of 2019.

From 2022 to a possible 2028, Medicare is projected to inflate by over 6.5% for just Part B and Part D premiums and IRMAA surcharges.

With Covid-19 wreaking havoc on the US healthcare system there is a distinct possibility that these inflation rates can go even higher. According to the CBO by 2033 both the Social Security and Medicare Trust Funds are projected to be insolvent.

There are only 4 ways of protecting both programs:

Keep in mind that the more you earn in retirement through tax-deferral equates to possible higher Medicare premiums due to IRMAA.

The bulk of your Medicare costs along with any IRMAA surcharges are automatically deducted from your Social Security benefit.

What is going to happen to the cost of your Medicare coverage and the impact it will have on your Social Security benefit as well as your taxes?

For the federal government to keep both programs, Medicare and Social Security, solvent all that is needed to do is have a public continue to defer their taxes until later and lower the IRMAA brackets.

It truly is that simple.

Your health is your greatest asset, the time to plan for it is today.